Peep through the keyhole into the Ryan household on a school day morning and it’s just like any other Aussie family – hectic.

That’s the word the TV personality, Westinghouse advocate and dad of two uses to describe his Cronulla household of two working parents, himself and wife Kara, and two children, Remi, 8 and Jesse, 3.

When it comes to their parenting approach, the former rugby star and wife Kara don’t rely on synced Google calendars or consistent schedules, but work week to week. That’s the nature of Beau’s career, with his schedule changing quicker than food seems to disappear after the grocery shop, whether he’s on The Amazing Race or filling in for Kyle on Kyle and Jackie O.

“Everyday is different”, says Beau, “but our kids are pretty constant waking up at 6.15am for my daughter and 7am for my son. Kara is the real MVP and jokes that things run better when I’m not there, but the big rule in the Ryan household is to pitch in the night before to help the other parent the next morning.”

We use a lot of fresh fruit and vegetables so it’s hard to prep lunchboxes the night before. Instead, it’s the other stuff, like laying out the uniforms and daycare clothes so there’s no rushing and increased stress. I also get up early and have coffee so I’m game ready. Breakfast is something convenient like Weet-Bix, fruit and yoghurt or avocado on toast. And if my son is up early enough and I’m around, I’ll do the daycare drop-off before school zones so I’m not stuck in traffic. 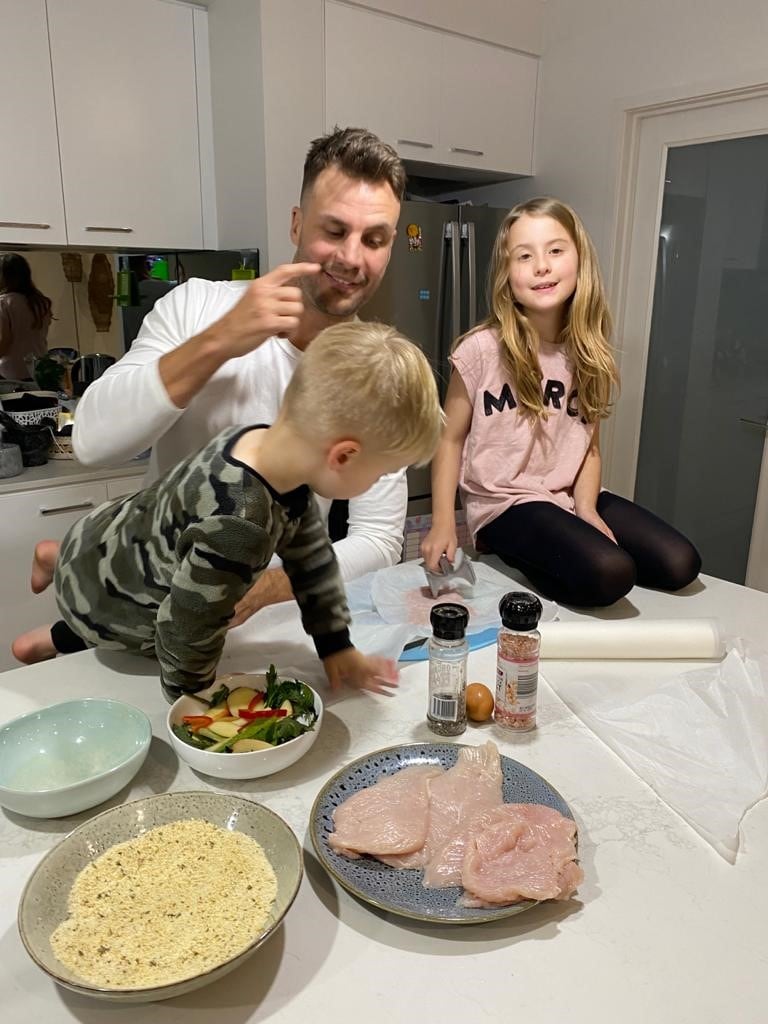 We dangle the carrot, especially with Remi. She’ll help prep her lunchbox in the morning and get herself dressed. If she’s ready before 8am she gets 15 minutes iPad time as an incentive. It’s incredible that when that’s dangled how quickly she can get ready. But there’s no touching of anything – TV, iPads, phones – until then. Later on in the week, if Remi’s been helpful and followed her routine, she’s allowed to have a friend over on Fridays and she always asks for the same dinner – chicken schnitzel with rocket salad – which we make in our Westinghouse oven on the Airfryer setting for a crumb that rivals even the crunchiest RSL schnitty.

On their easy go-to dinner

It’s hard to get something all the family loves, but carbs is that for us. With everyone so busy, we need high carb meals for the energy, especially if we’re back late from work, or after school activities – Remi does surfing, Oz Tag and soccer. Pasta is one. Kara makes a spaghetti with her own sauce that she freezes so it’s always on hand and lasagna. They’re recipes that use stuff from our herb garden so the kids are involved. Or, we defrost our pre-made chicken and corn fried dumplings, which we have on hand in the freezer, then bang them in the oven on Airfry at 220C for 10 minutes when speed to plate is key.

When I was on The Amazing Race the kids were staying up late and sleeping in which makes mornings even more chaotic. We learnt that lesson so try to make sure kids don’t go to bed too late. They’re usually in bed by 8.30pm, but especially daylight savings, Jesse won’t go to bed while the sun is still up.

My daughter is picky. She’s become a full Cronulla hippy. She’s gone off sandwiches and prefers crackers with hummus or seaweed snacks. She’ll still eat apples, grapes, strawberries, cucumbers and capsicum cut up, which Jesse will too, but for something substantial Kara will give her pasta in a thermal container that stays warm for her. When Dad’s in charge, she doesn’t get that. Jesse luckily loves sandwiches – honey, Vegemite and peanut butter (which you can’t take to school) and yoghurt so he’s easy. They love being independent and being able to grab stuff themselves from the fridge, so the Westinghouse French door is perfect, because the shelves are at their eye level.

The Un-Glossy, a celebration of real family life because we know it isn’t always picture perfect. The messy kitchens, temper tantrums, happy tears, belly and the purest love you can find.

4 Tips to Help You Save Money on Groceries

Making the most of leftovers

Christmas hosting hacks to make this festive season the best yet

Turbo-charge your cooking game for more quality time this summer

Andrea Heinrich Settles the Score on the Fridge-vs-Pantry Debate